Ira Brami is a performance artist, mask maker and artistic director. Since childhood she has been studying dance and music. At the age of 18 Ira moved to England to study the English language and after two years there, she moved to the Netherlands attending the Artez, academy of Arts before going on to study at the Drama school of Athens in Greece. She has many years' experience as a performer as well as in the creation and presentation of theatre and performance works. Ira has worked in Greece, Poland, Denmark and the Netherlands on projects ranging in scale from the bijoux to large scale festivals. She also teaches theatre and mask work through immersive workshops. Ira was born in Greece but she enjoys working and living in different countries to explore diverse roots and cultures. This year she is working with two other artists to create their own Theatre based in Athens.

In Levadia in Greece, Ira Brami is producing one of two parts of this project, Urban Kelpies: Awakening the River, a video work to capture her feeling for the River Clyde from her visit to Govan in September last year.

In collaboration with Scottish activist Helen Kyle, a corresponding video has been made by spoken word poets and local musicians in Govan accompanied by rituals around the water. You can watch the Scottish video below:

For the first residency in Gdańsk, I was very open to what could inspire me for the project. I was trying, through every detail, to capture the vibe of the city. I also wanted to research stories about the history of the city and the shipyard. So to combine all these influences, I decided to create an experimental performance in collaboration with young people from Gdańsk. I walked all around the shipyard, visited many places in the city, and met former shipyard worker, Mrs. Ula Ściubeł.

During our meeting I became emotional listening to her story so I asked if she would like to perform as herself, a retired employee of the shipyard. She liked the idea and agreed. So the performance already had a good starting point! The second residency was a really intensive time, I had meetings with Mrs. Ula Ściubeł, rehearsals with the theatre school group and with a professional actress who came from Greece to take part in the performance. The target was to involve young people in creative ways with stories of the shipyard. I think we achieved this. When I look back on the whole process up to the final performance, I have a big smile and a lot of deep emotions for all the people I met to realise this project.

Image: As above, so below (2019) a collaborative performance directed by Ira Brami at the Baltic Sea Cultural Centre, October 2019. Photograph by Piotr Perkiewicz. 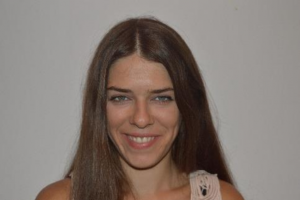