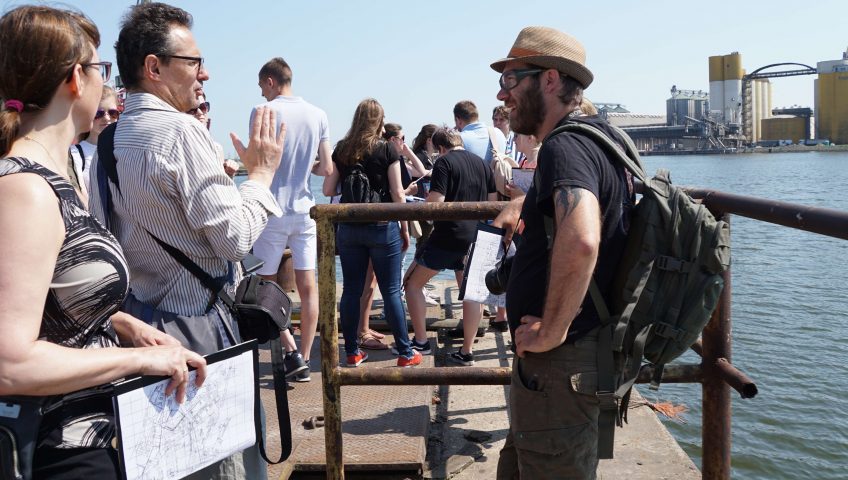 The first day of the research residency started with a meeting at the Baltic Sea Culture Centre during which we we presented to the artists the assumptions of the project in Gdańsk and technical issues related to its organisation. In the evening, we went for a walk to 100cznia to meet the organisers of this project, Alicja Jabłonowska and Kuba Łukaszewski. 100cznia is a small container town built on the outskirts of the former Gdańsk Shipyard. It consists of gastronomic points, art studios and an alternative art gallery. Every week there are concerts, exhibitions and meetings with interesting people. The idea of a social garden and the zero-waste principle are tested there.

In the morning, the participants made a trip by a tourist ship imitating a pirate ship. Its purpose was to view the Shipyard's grounds from the water. The route led along the Motława River and the Martwa Wisła Canal to the mouth to the Gulf of Gdansk. On the way, we passed Westerplatte, the place of the outbreak of World War II.

In the afternoon, the participants visited an exhibition at the Milk Peter, an alternative arts centre situated in the Shipyard. Next, the participants had the opportunity to get acquainted with the Social Zone arranged near the European Solidarity Centre on the occasion of the 30th anniversary of the first free elections in Poland. As part of the Zone, thirtenn thematic tents were organised, in which non-governmental organisations, institutions and organisations prepared interesting events, meetings, debates, children's zones, and film screenings. The programme of the day ended at the Academy of Fine Arts with a lecture by the activist, Anna Miler titled "Cultural Life in the Gdańsk Shipyard".

This day was devoted to a workshop titled "Gdańsk Shipyard – mental maps workshop” conducted by Dr. Klaudia Nowicka from the Department of Socio-Economic Geography of the University of Gdańsk. During the first part, the participants (Memory of Water artists and students of the Faculty of History at the University of Gdańsk) visited Stocznia, gathering field notes. In the second part, they worked in the historical BHP Hall, creating mental maps of this area. Mental maps are graphic representations of individual understanding of spaces, surroundings and places. They are subjective constructs influenced by one’s everyday activities, experiences, prejudices, emotions and cultural values associated with a particular place or area. The mechanism of individual interpretation of space plays a vital role when creating mental maps. When interpreting people usually simplify geographical or physical spaces that surround them. Thus, mental maps are usually abstract and no cartographic rules apply to them. The results of the workshop will be used to develop a scientific article in English.

In late afternoon, the participants took part in a renovation of a social garden in Gdansk Wrzeszcz.

This day was spent by participants at the European Solidarity Centre. At first, there was a meeting with Magda Fryze-Seroka who presented us activities of the Civil Design Department, focused on implementing values of solidarity into the social life. Then the participants met Ms. Ula Ściubeł, a retired worker of the Gdańsk Shipyard. She told about hardships of everyday life of workers in the communist time. After this meeting, the time came to visit the exhibition of the European Solidarity Centre.

In the evening, the group went to Sopot to visit the Museum of Sopot situated next to the beach and the Baltic Sea.

Participants visited the Media Library at the European Solidarity Centre. It was also a day of the individual research in the shipyard - seeking inspiration for projects. They went to the Gdańsk University of Technology to become familiar with the research of the participants of the international project “SOS Climate Waterfront”. At the same time, at the Baltic Sea Culture Centre hosted City Lab #3 - Stocznia Od/Nowa. In the morning, representatives of local authorities took part, as well as of institutions associated with the shipyard. In the afternoon, themed tables were organised around which artists, architects and local activists discussed the future of the shipyard area from a point of view of MEMORY, ART, WATER AND PUBLIC SPACES, PRODUCTION, GREEN AND ECOLOGY, DIALOGUE. Memory of Water participants had the opportunity to become familiar with the results of these discussions.

After few days of walking in the shipyard, participants had a unique opportunity to look at it from above – from the observation tower organised on one of the cranes. Then they visited an exhibition by Gdańsk photographer Michał Szlaga, "I Photographed the King of Poland", organized at Laznia Center for Contemporary Art. Szlaga made headlines in 2013, when he published his album Szlaga’s Shipyard. It is a specific publication whose aim is not art but an almost journalistic intervention in the process of disappearance of an industrial heritage site. The book was ready after thirteen years of his obsessive work of documentarian, gatherer and investigator observing the Gdańsk Shipyard.

It was also a day of the individual research. In the afternoon, the artists and curators met to discuss the first ideas of our projects to be realised in October and determine a way to prepare our work. In the evening, participants watched two documentary films about the past of the Gdańsk Shipyard.

It was a day of return trips. Nevertheless, the participants managed to visit the ship Sołdek, which is part of the exhibition of the National Maritime Museum in Gdańsk. It was the first ship built in Poland after the Second World War.