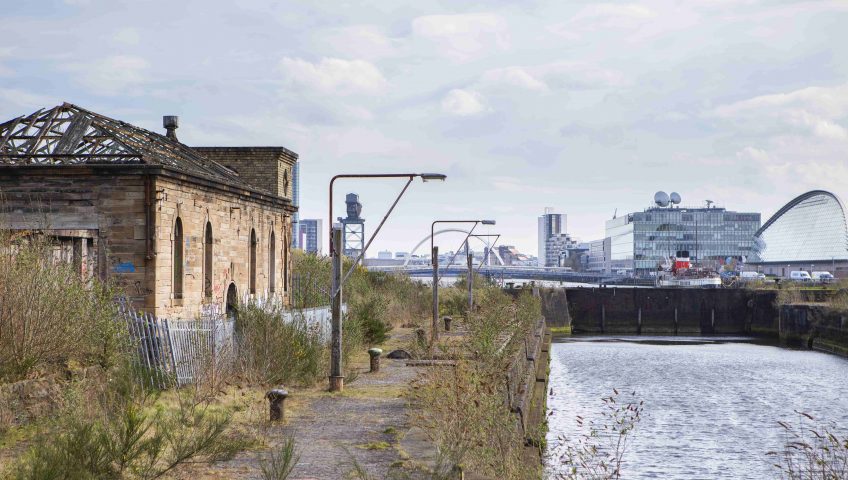 The first Govan Local Lab: Wednesday 1st May 2019 exploring the themes of Memory of Water and trying to discover what are the possibilities and limitations of the artist interventionist approach to planning and policy making on post industrial heritage zones.

What better qualified group could we have chosen to interrogate this question than a group of PhD participatory action researchers wanting to make a real difference in their community/community of interest?. Twenty researchers from all over Scotland joined Govan artists, activists urban planners and media artists to explore together, share ideas, findings, problems, issues and barriers

One of the most interesting aspects of our longitudinal work in Govan is that all of the key movers and shakers have chosen “walking” as a key tool in the tool box of participation with inhabitants, exploration of the terrain and community visioning of alternative futures. The activists (led by Iain McGillivary of Clyde Docks Preservation Initiative) have used “Walks to the Docks” for the last decade to encourage local people to see their place differently, discover the history and value of the iconic A listed heritage icons that are Govan’s Graving docks and to make sure that everyone is aware of the implications of land owner/developer proposals to build 750 high rise flats on them. 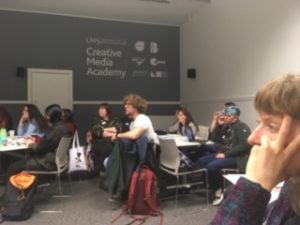 Historians and archeologists use walking to reveal the past to us. They take us to sites of mediaeval significance like the Moot hill that used to loom elegantly over Central Govan. It was probably a seat of democratic debate, possibly a burial ground for the ancient kings of Strathclyde, but it was very unceremoniously erased during the shipbuilding era and is now a car park. Quite what our ancestors must be thinking about cars parked on top of their last resting places is not for “progress” to worry about. Archeologists also walk us to the sites of mediaeval history in the grounds of Govan Old Church where Viking Hogback stones are finally being excavated and redisplayed: a small victory of the past over progress.

The urban planners and geographers use walking to show us the past meeting the future as we uncover signs of overgrown cobble stones and railway tracks from a past that is deemed archaic and consigned to history books (even though ships are still being built in the world). They point to the shiny new world that creeps towards us from the city centre, where the digital quarter smacks up against small, dirty, manufacturing and technology units in an attempt to deny their continued existence. We won’t need dirty repair units in this bright new digitally technical future we seem to be being told.

Architects have used walking to show us the various epochs of architectural development over the centuries from the small stilted river dwellers and the cottages that used to line water row to the caravans of the travellers site. 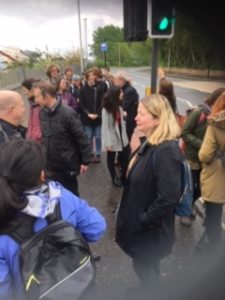 The artists involved in Govan (and there are many artists attracted to this fascinating place of rich heritage and controversy) have used different forms of walking and exploration over the years but the Scottish based artist tsBeall who is the lead Govan artist on the Memory of Water project has taken the art of walking into new territory. She has developed walks that use banners, posters, props, chalk markings, pavement art, historic archive images, performance and myriad other techniques to excite, engage and education participants about the hidden histories (mainly of women and ethnic minorities) that are lurking, undiscovered, in the Govan that we see today. She takes us behind the tenement curtains to reveal brave women activists and ship yard workers. She shows us marks and remnants of protest, heroism and the legacy of those who have gone before.

What each of these groups (and others like academics, housing officers and planners) all have in common is their use of walking as a methodology for exploration of the terrain

Our starting point was the value of walking as a method and we wanted to explore, not only why it is such a powerful way of experiencing a place but also to acknowledge the different “maps” that are created about the place depending on which lens we look through. The map of Govan created by artist and academic, Mitch Miller, who is part of the traveling show people community, for example, is a very different map from that created by the urban planner or the housing developer. Mitch’s map is full of the seventeen showmen’s yards that used to pepper Greater Govan, It shows us both the interiors and the exteriors of their vans, documenting their living culture and traditions.

Day one of our Govan Local Lab was introduced by Professor David McGilliavry who contextualised and theorised walking methodology. We walked in the neighbouring town of Paisley and discussed publications and books on the subject of human geography. Encountering the contemporary city through walking, he asserted, “induces a mobile, grounded perspective and foregrounds corporeal, sensual and affective matters”, enabling the researcher to “observe issues unfolding at street level, if only for a short time” (Bates & Rhys-Taylor 2017,p4). When aligned with other methods of intervention and documentation the experience of walking can be a powerful embodied method.

Throughout the two days ,we were introduced to aspects of the history of Govan through presentations before experiencing the place through walking, meandering, lingering, meeting people (like the charismatic showman, Mr Jimmy Stringfellow) who introduced us to their own “map” of the place. 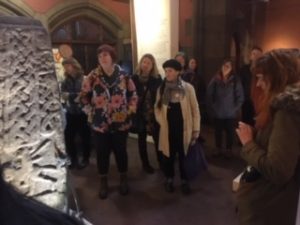 Finally, Dr tsBeal introduced us to her work of ten years based in Govan, working with Fablevision and others, supporting hidden histories to be revealed and silenced voices to be heard. Her art walks are on-going locally. With a local group, the Strong Women of Clydeside (SWaC) she has revealed the role of women in Govan’s protest movements: particularly the 1914-18 rent strikes and the Red Clydeside sit in of the 1970s that has echoes of the Solidarity Movement in Gdansk, Poland. In fact, the precursor to Memory of Water, Riverside Solidarity, saw Tara working intensively with a similar women’s walking group in Gdansk. Walking with the Show people has been a key aspect of her work as show people still see Govan as their “parish” with showman members (Jimmy Stringfellow is an elder of the church) of Govan Old parish church. There is even a stained glass window in the church depicting a fairground hobby horse, celebrating that connection. The presence in Govan is now vastly diminished: reduced to two remaining yards. Both of these yards are situated on the riverfront where Harland and Woolf shipyard operated and all fifteen families are subject to eviction as “progress” demands their removal to make way for new housing. Tara described her work with the Scottish Show people community at local and national level to impact policy and planning. We discussed the ethics that have us respond to the need for on going support rather than creating art and then moving on.