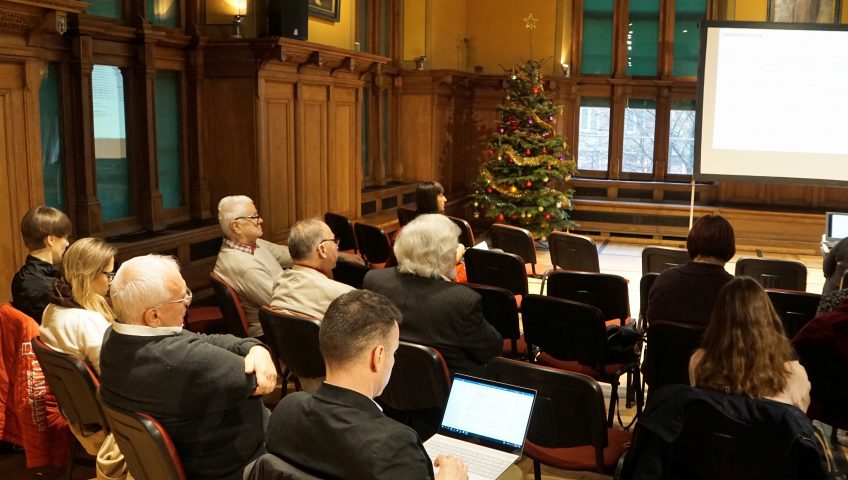 On 17 December in Gdańsk we summed up the project Memory of Water EU Creative Europe Shipyard aNew. We have collected and presented proposals for development of post-shipyard areas in Gdańsk – our common “dreams to fulfill”.

Preserving the multi-layered identity of the Shipyard through:

– preserving the archaeological relics of the medieval roots of the Young City and proper documentation of their fragments which are at present not included into the area of archaeological protection and which may possibly be demolished;

– maintaining the comprehensive visual identification of the former Shipyard area, which affects and forms the unique character of that place (including the original patina, rust, wild greenery, etc.)

– recording individual stories and tales of former Shipyard workers (and their families);

– preserving the original names given to the streets which form a dense, historical network. The names of the streets refer to the identity of that place and are taken after the names of shipyard professions, such as: Toolmakers St., Loftsmen St., Riveters St., Hull Assemblers St., Fitters St., Moulding Workers St., Boilermakers St., Transport Workers St., Painters St., Shipwrights St., Pipefitters St., Electricians St., Outfitting Workers St. etc., in order to continue a medieval tradition, which was once established in Gdańsk to honour some characteristic and significant professions by naming the streets after them. It can be now observed in the area of the historical Old Town, where the streets are named after anchor-makers, malt-house workers, goldsmiths, rope makers, carpenters, purse makers, bakers, wood-turners, assessors, weavers, butchers, clothiers, etc.

– preserving, maintaining and opening two remaining bomb shelters for visitors. One of them is located in the Milk Peter building (the shelter was intended for medical purposes), and it is a silent witness of a large industrial plant which used to function here during the Cold War period. The second bomb shelter is located at the edge of the A sector, next to the former Fire Station building.

Developing and implementing a homogenous system for describing particular buildings and facilities. Descriptions should provide relevant texts and pictures (the same site plan with buildings and locations of the former shipyard halls arranged along the shipbuilding technological assembly line).

Clarifying the area and relics of the former slipways, next to the trapezoid dock basin (e.g. in a form of a public square); using greenery to indicate the layout of the buildings which do not exist any longer at that place.

Establishing a new department of the National Maritime Museum in one of the former shipyard halls. It would present the history of Polish shipyard industry. Transferring the s/s Sołdek to the area where it was constructed (K2).

Restoring a flower garden in the area located next to the former Gdańsk Shipyard Management Office and clarifying the area where departmental garden allotments were located with their new re-arrangement.

Providing visitors with free access to the inside of the shipyard halls. It can be achieved by inserting some independent structures inside the hall buildings with the proper distance from the existing outside walls and the original roof construction (with some possible horizontal partitions inside those structures).

Clarifying the primary function of the crane located next to the Milk Peter building; it can be achieved by restoring a section of the crane track and leaning its platform against the wall of a new building (constructed on the site of the demolished hall).

Implementing an education programme addressed to children, young people and adults to present the legacy of the former Gdańsk Shipyard and the identity of this place through the following:

– organising art workshops, tours with local guides, meetings and conferences referring to the history of the city and of the district. It would largely contribute to education about the history and the identity of the place.

Providing an attractive system of public space as an alternative to the process of the city overspill. It can become a unique (love)brand of Gdańsk which will affect the character and perception of the whole city. Reference to the local tradition and identity of the place (not copying).

Providing a dominating position of pedestrian and bicycle traffic and public transport; it can be achieved through the following:

– developing a dense network of public spaces with proper use of the existing historical streets and squares which would be efficiently connected to the historical city centre (without any possibilities to construct gated office and residential buildings);

– constructing a modern (multi-modal) train stop for SKM (Fast Urban Railway) trains to provide efficient links to the metropolis, with the use of the historical railway footbridge adjusted to bicycle traffic (to compensate for the lack of a bicycle lane along the bridge at the Fr Jerzy Popiełuszko St.).

– eliminating barriers to free and attractive access to the waterfront achieved by resigning from the construction of 4-lane road of the total width of nearly 50 meters, with an additional lane of tram tracks in the middle (which is included in the local spatial development plan);

– creating an urban beach and friendly places for anglers and kayakers (with an easy access to the quay);

Defining the required spatial features for all the urban spaces defined by the network of the streets in that area; it can be achieved through:

– human-scale architecture (residential, service and office buildings which can be easily adjusted to some new functions and easily adopted for new situations) with commercial and service facilities at the ground-floor level, accessible from the streets and boulevards, which will offer a wide range of prices dedicated to various social groups and which will develop a sense of closeness, cosiness and community.

Creating symbolic capital and artistic stimulation of the sustainable development of the discussed areas through the following:

– referring to the cultural context of the Shipyard as to a collective piece of art and using it as a lever for a cultural project undertaken by the whole region, based on its historical legacy but oriented towards the future challenges, which can exert influence and participate in global politics through relations formed with institutions and geopolitical processes (changes to the global order and cultural domination, for example the role of a new Silk Road, etc.);

– widening areas of freedom in art and allowing brave artistic intervention, artistic and research projects and experiments to take place, without defining their outcomes in advance (spontaneous “loud thinking”), propagating values such as tolerance, freedom of speech, critical thinking etc.;

– securing 1-2% of the budget of the (public and private) investment implemented in the area of the former Shipyard for art;

– creating and maintaining a collection of permanent pieces of art of high quality which would stimulate reflection and fuel discussion about the history of the district, its specific local character and social problems (not only decoration or estheticisation of the space);

– artistic activities which will foster meetings of the local community and guests: organising concerts, picnics, meetings with authors, etc., addressed not only to new inhabitants but also to people who have had strong bonds with the discussed area before its revitalisation process, such as local inhabitants, their neighbours, former Shipyard workers, artists and activists who have contributed to the unique character of the Shipyard area.

– artistic light installations in some particular spots in the area which will make it a safe and attractive place 24 hours a day;

– summer outdoor cinema where movies will be shown on a big screen installed between two shipyard cranes every night of the summer holiday. People will be able to watch movies from the Shipyard area, from the Zwycięstwa St., from the Fast Urban Railway stop or from Grodzisko. The movie soundtracks will be broadcast via the Internet so that people, regardless of their location, can listen to them on their mobile phones and participate in the experience.

Establishing a brand to mark products (including pieces of art etc.) manufactured or created at the Shipyard – a unique, recognisable trade mark (Made in Stocznia).

Starting an open social garden and an orchard (named, for example, The Solidarity Eden Garden) and small cosy gardens next to the residential and office buildings by the inhabitants and users of the discussed area (urban gardening) in order to honour and to continue the tradition of a garden which was once made at the Shipyard in the Post-war period to provide fresh fruit, vegetables and flowers to the Shipyard workers and small, cosy gardens which were set up by the Shipyard workers (including Anna Walentynowicz) next to the Shipyard halls were they used to work.

Including the Steffens Park into the system of the transformed public area of the former Gdańsk Shipyard, ensuring its open and casual character (accessible lawns, possibilities to play various games, to practise yoga, to enjoy sunbathing, etc.).

Leaving one selected Shipyard building, one element of technical infrastructure and some places at the former Shipyard to undergo changes brought by time and wild nature so that wild meadow greenery can grow there (to allow wild flora species to develop there, attracting bees that can live in hives set up on some building roofs). Using greenery to present the layout of the non-existing Shipyard buildings which were once demolished.

Constructing a bioTECTONIC building to have a place where people can talk about ecology, including workshops for children in order to develop new ecological awareness in people at the very young age.

Providing a place for creative and efficient re-use of waste, where it can get its second life (be re-used) in a new form.

Providing an open forum for a free dialogue in order to continue the tradition of the Solidarity, with the participation of officials, planners, social organisations, inhabitants, experts who specialise in various fields (urbanists, architects, art historians, artists, etc.), cultural and scientific institutions and the owners of the area. Forming some independent opinion-making groups to discuss the implementation of the particular ideas, during the meetings, discussions, guest lectures, publications, etc.

DISCUSSION PARTICIPANTS – THE AUTHORS OF DREAMS/IDEAS

Janusz Chilicki, a representative of the NIE dla burzenia Stoczni Gdańskiej (NO to Destruction of Gdańsk Shipyard) group of activists

Mona Rena Górska – a craftswoman specialising in philosophy and costumes

Filip Ignatowicz, a multi-media artist and a film director

Michał Mazurkiewicz, an artist and a photographer

Roman Sebastyański, an urban artist and an initiator of the Colony of Artists at Gdańsk Shipyard

Agnieszka Wołodźko, an artist and an art curator

Iwona Zając, a visual artist and a former resident of the Colony of Artists