Memory of WaterLevadiaReflection: The river as a place to remember and a place to forget

I was incredibly inspired by the stories of the River Erkyna when I came to Levadia for the first time during the research residency in January 2019. I came away thinking that the river was a kind of spine for the town, historically providing everything from laundry facilities and rubbish takeaway, to an important place for ritual. The river was a place to remember and a place to let go – echoing the myth of the Oracle of Trophonius (see image above), which like many ancient Greek oracles was built at the nexus of two springs. I began asking about stories or rituals involving the river, from everyday encounters to symbolic and important lifetime events like baptism. 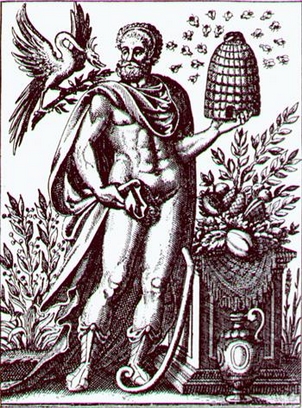 Image: The Greek myth of the Oracle of Trophonius, and its relationship with the nexus of the River Erkyna, was a key inspiration for visioning work in Levadia.

Image: Rugs drying on a bridge c1960 – vestiges of domestic activity on the River Erkyna, in the public realm.

I was intrigued by this image (shown as part of a lecture by historian Vassias Tsokopoulos), as it reveals an intimate, domestic moment when houses are in some way turned ‘inside out’. For me, it depicts such an everyday use of the river. I was on the lookout for other images of rugs or clothes drying along the riverbanks, or of people washing clothes, but I didn’t find many. Someone tried to explain to me that washing in the River Erkyna was so normal that it was not considered image-worthy. Recording it would be akin to taking a picture of the clothes in your closet: it was a forgettable necessity.

Image: River walkway panoramas in Levadia, taken during a conversation with Angeliki Peleki & her son, Georgias.

We were fortunate to meet many people in Levadia; everyone was incredibly welcoming, and many generously shared their memories. I spoke to Mrs Georgias, 80, who described working in a textile mill when she was 13. Members of her family were Communists, and in that political climate it was difficult for them to find work. She described what it was like for her and the other young girls who worked in the mills along the river in the 1950s.

During a walk along the river, Angeliki Peleki shared recollections from her grandmother, who as young woman spent many afternoons in the river washing the family’s linens. She mentioned the phrase 'Να το πάρει το ποτάμι / Let the river take it' (pronounced NAH toe PAR-i toe po-TAM-ee). This struck me as a beautifully precise way to describe a place to ‘let go’ – a place for release. I am mindful that catharsis is a Greek term, forged from the Ancient Theatre, designed to allow theatre-goers a highly charged emotional experience that encouraged them to let go, and to leave renewed.

I left Levadia feeling invigorated – with many inspiring images and conversations in my head, and even more questions.