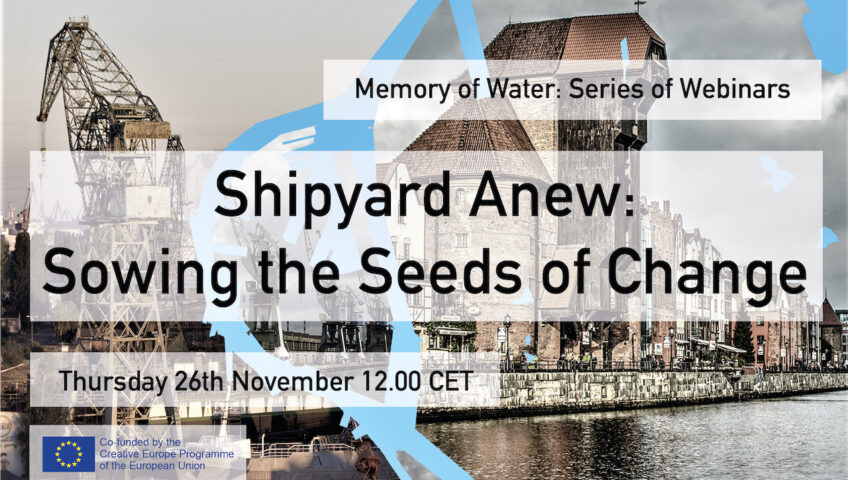 Hosted by the Baltic Sea Cultural Centre in Gdańsk (Project coordinator: Magdalena Zakrzewska-Duda)
In Gdańsk, the Memory of Water (MoW) project, co-funded by Creative Europe, has focused on the historic former shipyard areas, which are currently being re-developed. In the background, there is awareness of the importance of the Shipyard in the history of Gdańsk and Poland. “Solidarity”, the largest socio political movement in Europe, was born here.
This wealth of tangible and intangible heritage has made "Gdańsk Shipyard" an extremely important place: not only on the map of our city, but also in our hearts.
Our activities have been inspired by iconic symbols of Solidarity and remaining industrial architecture, as well as through individual human stories. One of the biggest discoveries we have made during the project is the green heritage of the Shipyard and its significance for the future narrative about this place. We hope this discovery will have a major impact on its redevelopment.
During the webinar Roman Sebastyanski and Agnieszka Wolodzko will present an overview of the processes they respectively curated: a ‘city lab’ series (entitled Shipyard Anew) and artist residencies. These two aspects of the MoW Gdańsk activities have been closely interconnected and have inspired each other.
Next, the project’s results will be shown in the local context of main stakeholder feedback. However, we also believe that our conclusions concerning the re-interpretation of the role of fauna and flora in the past and present will Impact the future development of the shipyard area. Knowing the importance of green heritage will influence greater recognition of the green potential for post-industrial waterfront heritage in Gdańsk as well as in other European cities. We hope we have sown the seeds of change*.
Cf. Art intervention “Seed change” presented at Gdańsk edition of MoW in 2019 by Mary Conroy from Ireland.
This webinar is presented with excerpts from “Memory of Water Gdańsk Film” by Jonas Myrstrand.
You can watch the full event below:
Twitter Facebook