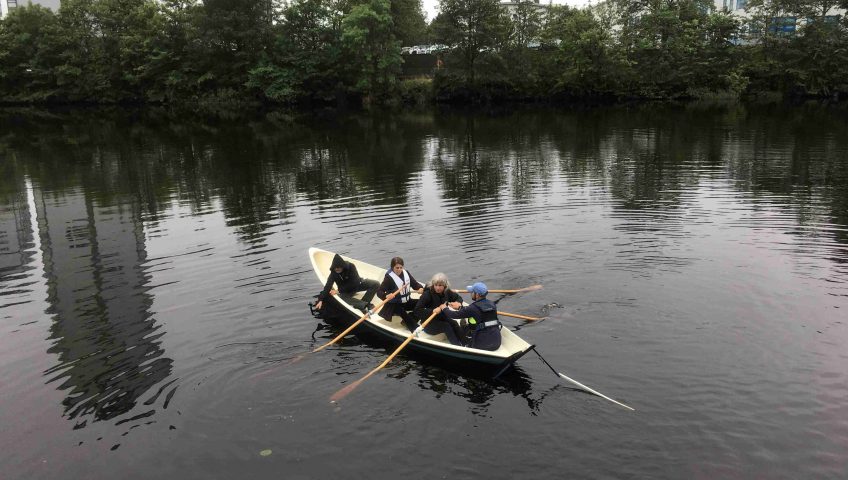 Memory of Water’s first international City lab in Govan (the second one is scheduled for June 2020) took place in Film City which is located in the magnificent (and fairly newly refurbished) old Govan Town Hall. The organisation running the building now rents offices, production and post-production spaces to creative media companies. Our urban lab was a hugely successful full day of exploration of the main themes of Memory of Water.

The overall theme of the Lab was the role of participatory arts practice and artistic interventionism in future planning for post-industrial heritage zones in Europe.

We opened our deliberations with a welcome to Govan from the local Green party councillor, Allan Young who praised the amazing groups, people and places we had visited during the week. He, like us, is amazed at the wealth of resources Govan has but, like us, is anxious as to why they are not being better used sustainably for the good of Govan and her people.

Our lab was organised as a series of panel discussions with our first panel exploring heritage (tangible and intangible) and the barriers to how it is being respected/incorporated in a cultural planning approach. Dr Alan Leslie set the Scottish national contextual scene with a provocation around the abundance of heritage and history (deeply appreciated by Govanites) and posed questions about why this heritage is not more respected and used to deliver jobs and training for the area. He also flagged some hints around land ownership, power and competing agendas that could offer some answers.

Dr tsBeall focused her presentation on the issue of Govan’s Showman community. Showmen have been based in Govan for centuries. At one time there were 17 yards in the area but now there are only two. The two remaining yards are on the riverfront at Water Row and the resident families are under constant threat of eviction as plans take shape for new housing developments and a bridge joining the two banks of the Clyde. “Show people are the last permissible cultural group to suffer discrimination” she asserts. The show people are much loved locally and it seems staggering that decision makers can’t see the potential of the contribution show families could make to future plans. Councillor Allan Young agreed and has tried to fight their corner with little success so far.

Angus Hardie from Local People Leading led us through the maze of Scottish Government policy in 2019 which has placed major emphasis on community empowerment, the community right-to-buy and the community right to enforce sale. We should be living in the perfect policy environment in Scotland right now, to support Showmen as well as the visions and alternative futures that artists support communities to develop. There are very few examples in urban Scotland, however, with Kinning Park Complex (KPC) being one notable exception.

Our urban lab panel discussion then explored why all of this is the case and what are the problems, issues and barriers. We also reminded ourselves of the European Context. As we progress through our Memory of Water learning journey we are discovering that in many European post-industrial cities, problems of gentrification and loss of memory are shared issues. There are unique sets of circumstances in Govan, Gdansk, Gothenburg, Ostend, Levadia and Limerick but in all cases there are tensions between what artists working with local people are able to imagine for their places and what other key stakeholders envisage. In the discussion, our artists shared their experiences in other cities

As the opportunity of this residency and urban lab in Govan was for artists to share experiences and practice: learning from each other and growing possibilities for future work, our second panel focussed on the cultural policy of the city of Glasgow (Katie Duffy from Glasgow Life helped us with this) and in particular the role of culture and artists in city/neighbourhood planning. Katie introduced the current ambitious residency project in every neighbourhood of the city that Glasgow is running. We then heard from Alex Wilde who is one of those artists in residence. Alex shared her practice and her experience as well as what she sees as the problems, issues and barriers to taking local aspiration from vision to activism and delivery. She is the chair of one such project in Govanhill where this has actually happened: Govanhill Baths Trust.

The community of Govanhill is diverse and with high indices of multiple depravation (including ill health) so the existence of the community swimming baths facility was hugely important. When the City Council decided to close the baths to save money, a community group staged a sit in for several years. Like the Kinning Park Complex, they established a volunteer committee and governance structure coupled with creative and cultural activities (artistic interventionism, an annual cultural festival and much more) that continually raised the profile and aspirations, keeping the focus on returning the baths to the community to be a support and contribution locally as well as delivering ownership of the building into local hands. There have been huge successes and like the Kinning Park Complex, they have almost broken through to success.

Our discussion following panel two presentations was wide ranging and honest in its identification of the perceived limitations: the gaps between community vision and the reality on the ground. In particular our question was: “why (when policies at government level are so favourable) does it have to be such a huge, prolonged and exhausting struggle? One key question emerging concerned the nature of the City’s interventionism and artist residency programme: is the context arts development (designed to promote arts activity and deliver arts services where there are missings) or is it cultural planning (in other words, designed to facilitate local people in the process of community empowerment)?

Panel three of our urban lab shifted our focus to artists working on waterfronts all over Scotland and we were joined (virtually) by the hugely respected and experienced Minty Donald  performance and Nick Millar. They have been “guddling” (an old Scots’ word for messing about in water) all over Europe for almost a decade, creatively exploring the social and economic aspects of various rivers and their people.

Our final presenter within this panel was Mark Zygadio who shared his work on the River Nith in Dumfries, including his latest work called Water Organ.Along with artists at the Stove Network (www.thestove.org) Mark has managed to refocus energy on the river, attract people to celebrate it with an annual festival and open dialogue around how best to use it sustainably in a future beset with problems like climate change.

Our open discussion at the end of this panel presentation marvelled at the real dialogue transformation that has happened in all of our examples on the ground: not least in Govan where interventions from artist and activists has really transformed assumptions about the future of the Graving Docks. The 750 high rise homes will definitely not be built and we are now able to turn the conversation to what’s next.

If not housing, then what?

Our final urban lab panel session gave the platform to our own Memory of Water artists starting with artistic director, Mary Conlon, who gave us an overview of the work and findings so far. The variety of practice and approaches is diverse and rich with each artist committed, passionate and skilled at working in community settings.

Iwona Zajac (Poland) presented her work in the Shipyard area of Gdansk as well as other work with women’s issues and political interventionism.

tsBeall (Scotland) presented her work allowing the normally hidden voices and histories (like women working in the shipyards, fighting for rent rights and the plight of the showpeople) to be heard.

Ira Brami (Greece) has only just joined the team as she replaces the original Greek artist who had to leave the project but already, she is one of the team and representing a huge contribution.

Mary Conroy (Ireland) presented her work working with rivers and natural habitats mainly in Ireland. Again, Mary was excited to share with other European artists with varied practice.

Finally, we heard from Jonas Mystrand (Sweden) sharing his Gothenburg shipyard virtual reality, the task of filming a flavour of activities on the Memory of Water project and of course, his first filmed piece from Levadia (https://vimeo.com/357175263).

The learning has only just begun from our process in Govan but already there are some emerging findings:

– The threat of gentrification is as big a threat in Govan as it is in other European cities. Already, much of the Clyde has been built on with high rise homes and loss of industrial infrastructure. There are a few locations left, with Govan Graving Docks being one of them. What will happen to them and can the artistic interventionism make any real, tangible impact.

– We noticed the dialogue about arts and culture tends to be focused on “arts development” rather than cultural planning with Glasgow City Council officers and we wonder how we can influence that thinking. Without full distinction of the differences, it will remain a struggle for the Govan Hill Baths and the Kinning Park Complexes as well as the Govan Graving Docks.

– The question of Governance is a fascinating area that is opening up from our Govan deliberations. There is a big focus on artist collaboratives and artist collectives across Europe in the 21st Century. However, it seems to be the structure that has both artists and local people in the management and driving seats that have the most power and sustainability.

These are just three of the key themes that are emerging from our initial thinking. All themes to be explored further and to bring to our thinking when we next meet in Gdansk, Poland in October.

Finally, and with great excitement, we are delighted to have been invited to exhibit the initial outputs from Memory of Water in the Scottish Parliament during the return week in June 2020. This is on the one hand a huge opportunity and on the other, a nerve wracking prospect as we need to capitalise on the possibilities, we need to create something with impact, quality and outputs and we need to inspire debate around it in the parliament.