Memory of WaterGdanskReflection: Gdańsk through a Govan Lens 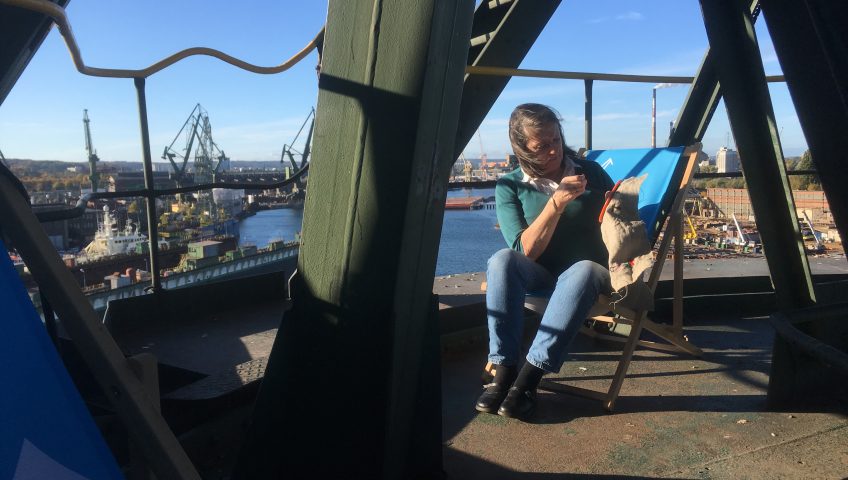 Reflection: Gdańsk through a Govan Lens

Whilst the production residency in Levadia had resonance for Govan in its links to textile making with its focus on the stories of local people and their ordinary traditions like washing cloth in the river, the Gdansk situation has more of a mirroring with Govan. Govan and Gdansk share histories in the development and decline of shipbuilding accompanied by protest. All of our six city artists reflected these aspects of Gdansk shipyard’s industrial history in their interventions.

Siegfried Vynk from Ostend made work on the side of an old shipping container that reflected both the infrastructure and the people that were the inhabitants of shipyard (now mostly vanished) using colours that are also the colours of the yard. The shipping container will become the cafe, ticket and information centre for a social enterprise that is developing number 3 crane as a tourist attraction. It is already possible to climb to the top of the crane and experience what it must have been like to be a crane operator. 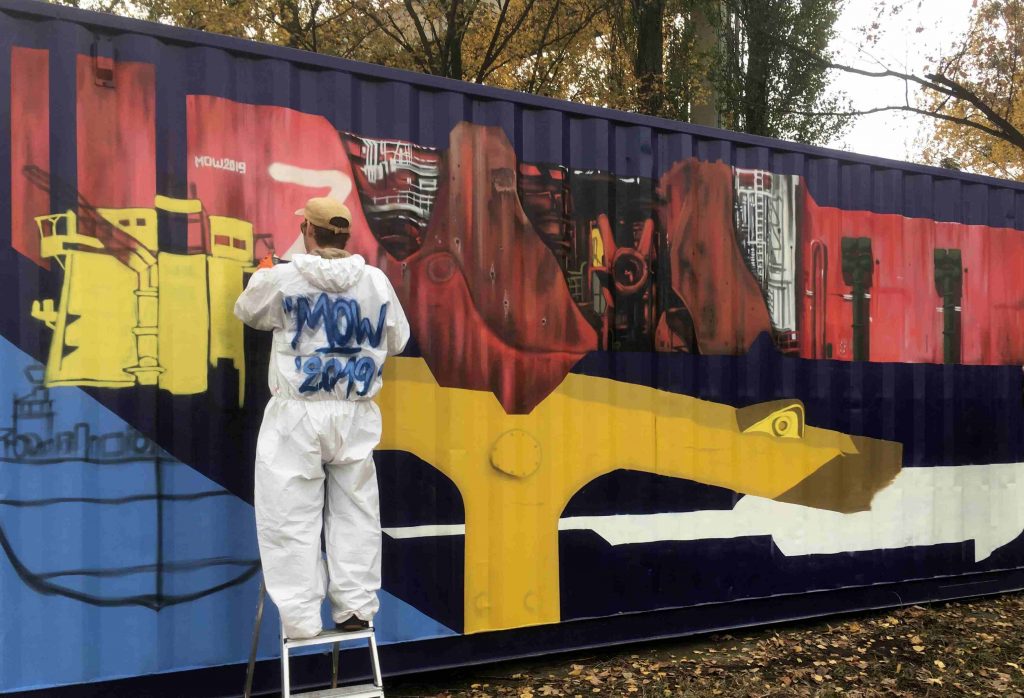 Mary Conroy from Limerick ran participatory workshops throughout the week: participants made facsimiles of traditional tools (spanners, wrenches, hammers etc) in clay. The clay was laced with wild flower seeds and laid out inside a rope roundel on an abandoned post industrial waterfront brownfield site in the shipyard. Her aim is to support the reclamation of the site by nature,now that the industry is gone. 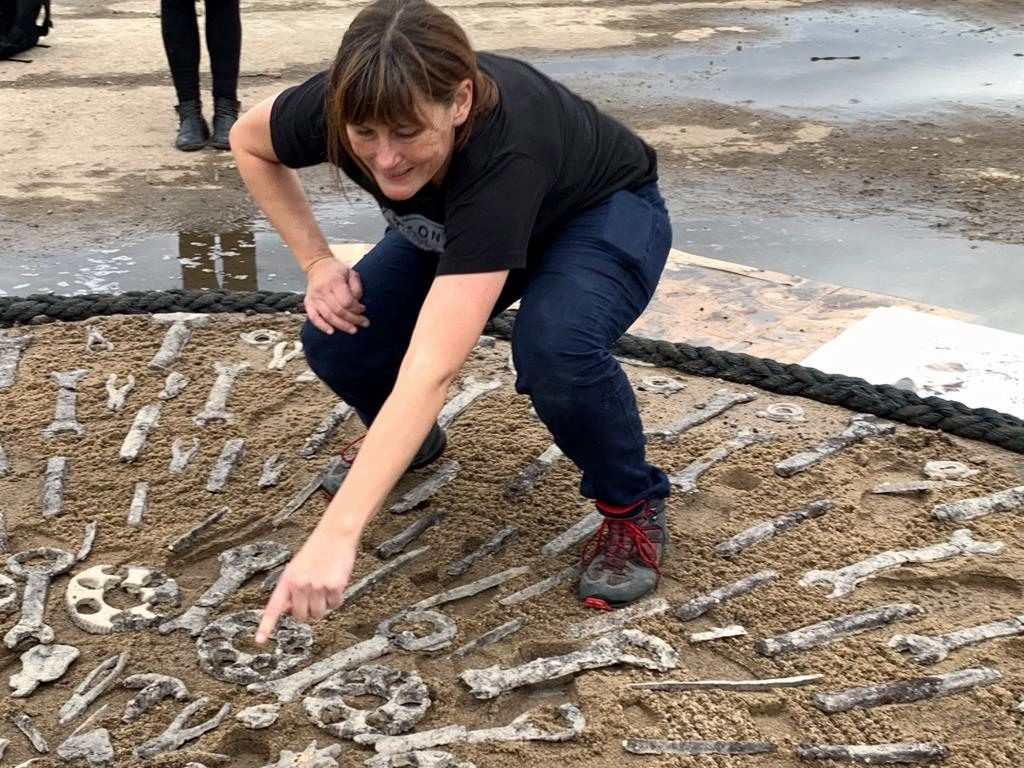 Gdansk based Iwona Zajac worked with the heroic broadcasters of the subversive Radio Solidarity station that delivered hope and determination to ordinary citizens of Gdansk during the 1980s and the campaign to overturn communist government corruption. She recreated some of the programmes for us to hear during her event to celebrate her work and has documented the story in an accompanying book. There is an aspiration to encourage the European Solidarity Centre to incorporate her installation in their documented history of the Solidarity struggle. There is even a reconstruction of a 1980s living room in Gdansk complete with traditional radio set that could broadcast the programmes. 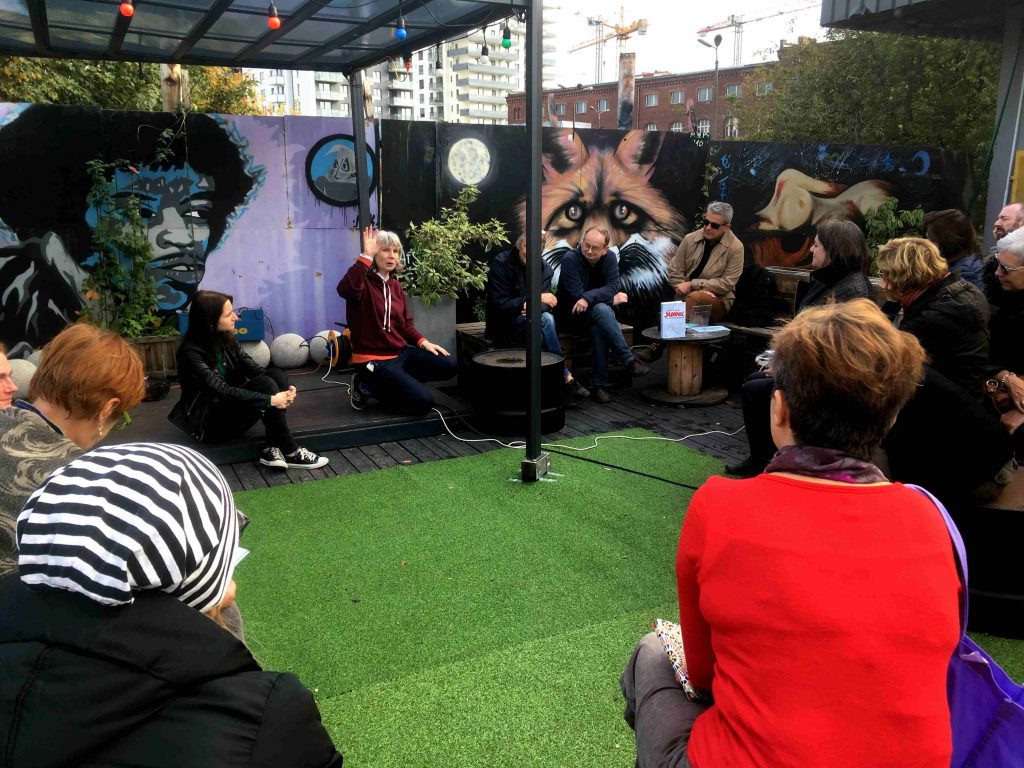 Govan based tsBeall worked with three strands of shipyard history-making. ‘Greening the Shipyard’ recreated the gardens and greenhouses that were a feature of shipyard community living with stencils and in real time by replanting the huge planters and trellises of Toolmaker Street gardens. ‘Embroidering the Shipyard’ was a tribute to the women who (as in Govan) worked alongside the men but have somehow been written out of the narrative. The linen used in the pipe insulating process was used by women crane drivers in their breaks atop the cranes to catch up on their embroidery projects. Tara took groups up to the top of number 3 crane for embroidery workshops in their memory. In particular, she commemorated the women pipe insulators whose job involved cutting asbestos to wrap around the millions of exposed pipes, held in place with the linen and ‘set’ with a resin that they christened glass water (the nickname Glass Water becoming the overall title of the three strands of her work). As the health hazards of asbestos became clear, the women were given health breaks at a mountain spa but were still not provided with masks or protective clothing. As a result, most of these women perished from lung disease and Taras third strand of work which she titled “Mourning the Shipyard” was a private series of events to lay traditional carnations on the graves of the dead women. 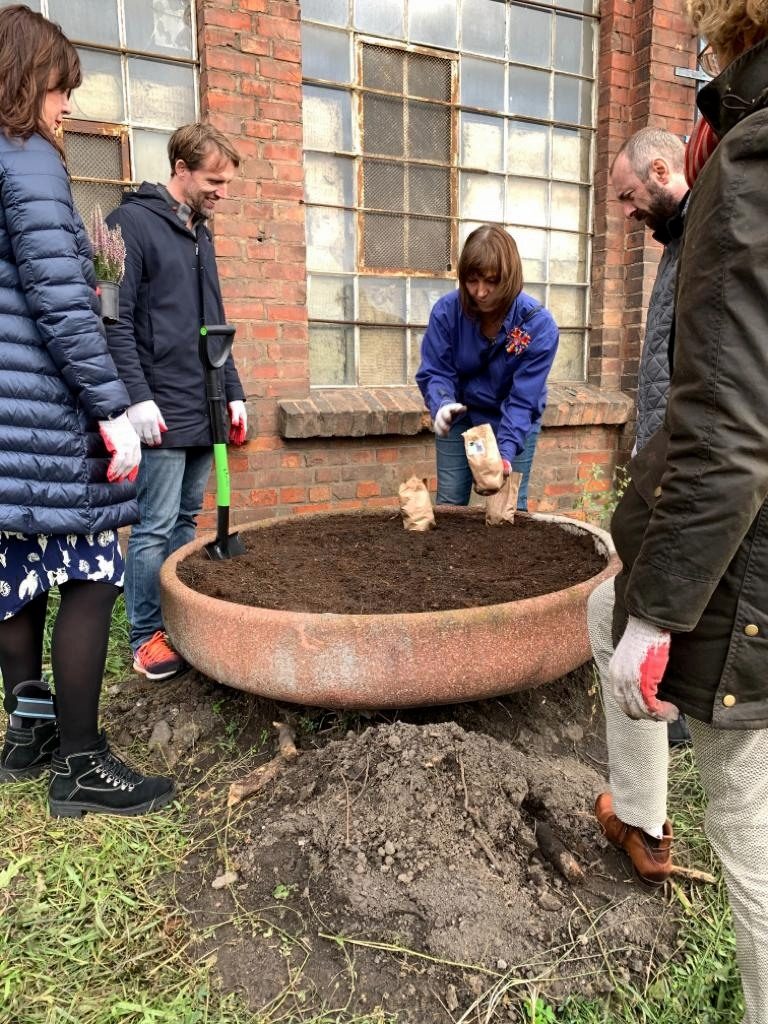 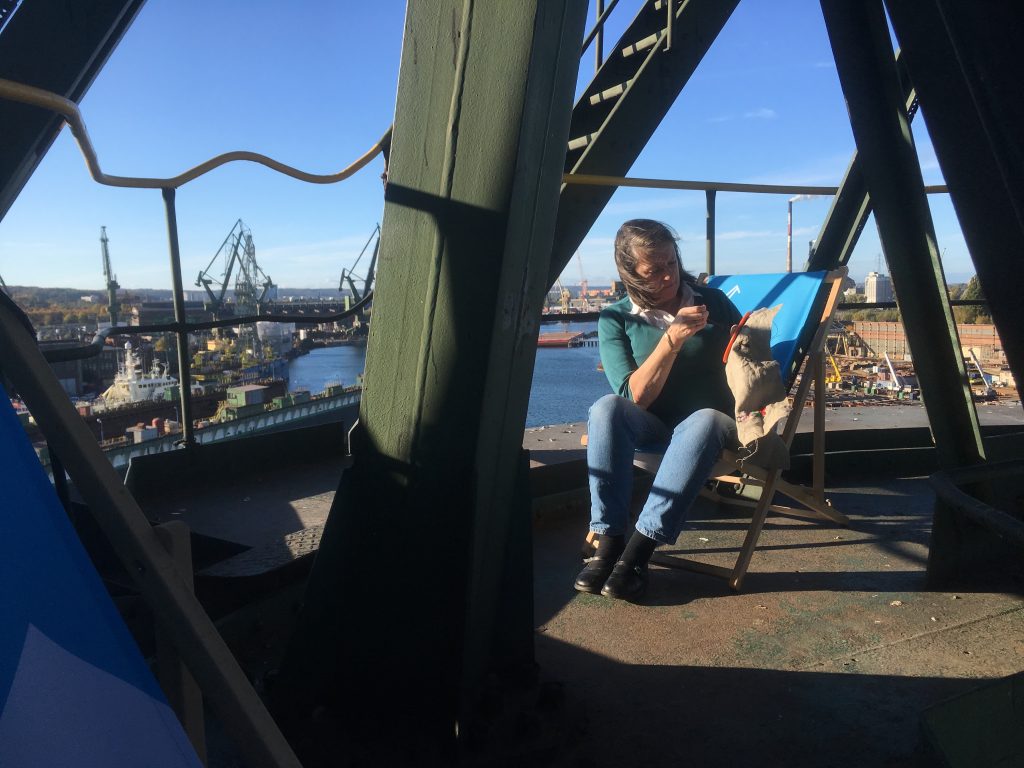 Greek artist Ira Brami worked with some of these same stories (told by Mrs Ula, survivor of the pipe insulating process) in a theatrical performance using three languages (English, Polish and Greek) involving local young people, masks, music, movement and Mrs Ula herself. In a haunting, symbolic piece performed in the City Hall, the theatre drew us into the humanity of the young lives blighted and reminded us that life in the shipyards was not the romantic ideal that it is sometimes portrayed. 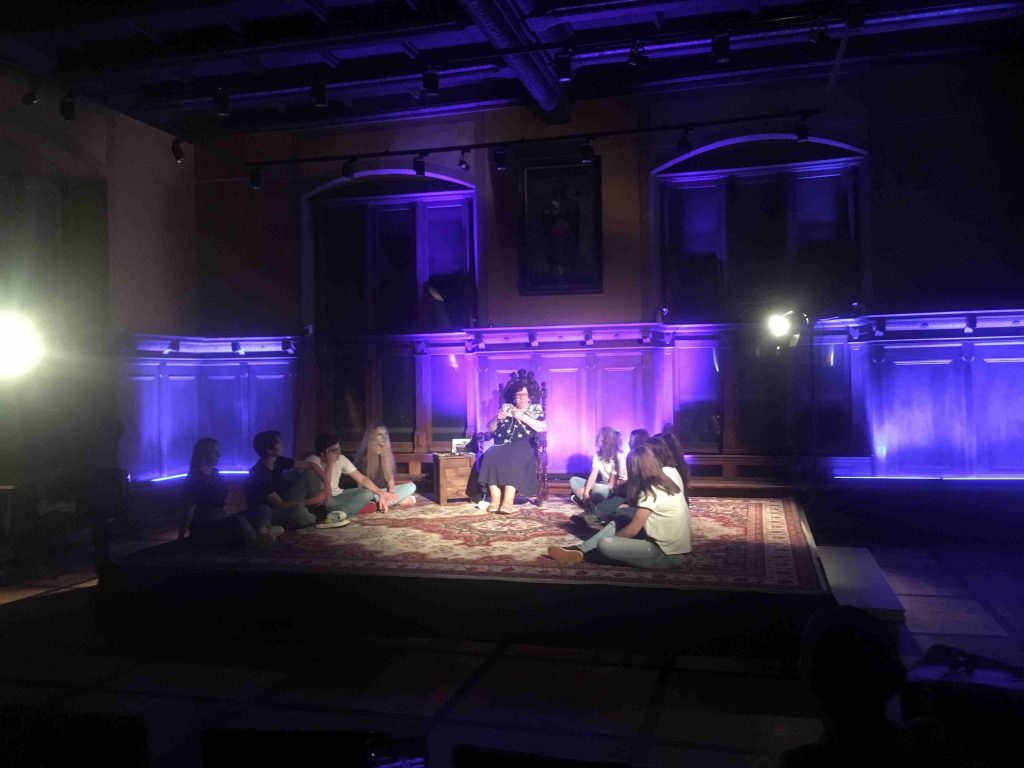 Finally, Jonas Mystrand from Stockholm/Gothenburg continued his process of gathering footage for the telling of our two year journey of discovery together, including the work of each of the contributing artists. 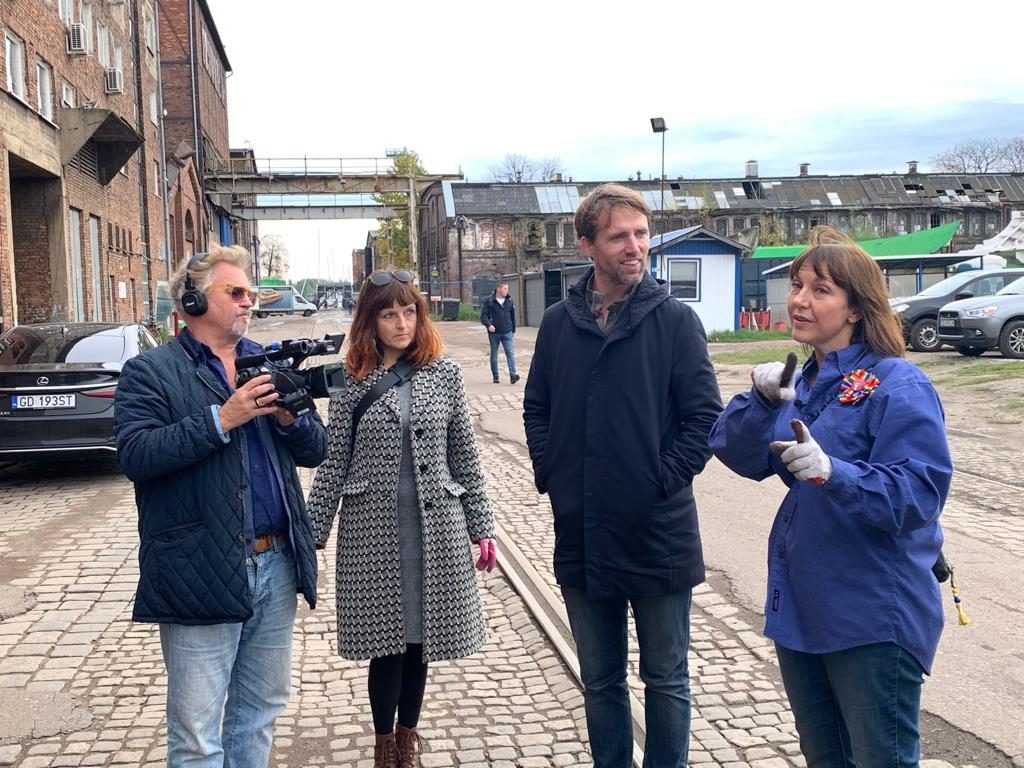 Gdansk’s production residency added two new partners as we look towards the next stages of our collaborations. New River Cities network members from Georgia and the Ukraine presented their work in Batumi and Mariupol respectively. Artists from a leading Mariupol cultural intervention called Burning Women presented a sound and visual piece in a local nightclub including visuals of devastated post industrial landscapes with cranes, railway tracks and abandoned buildings 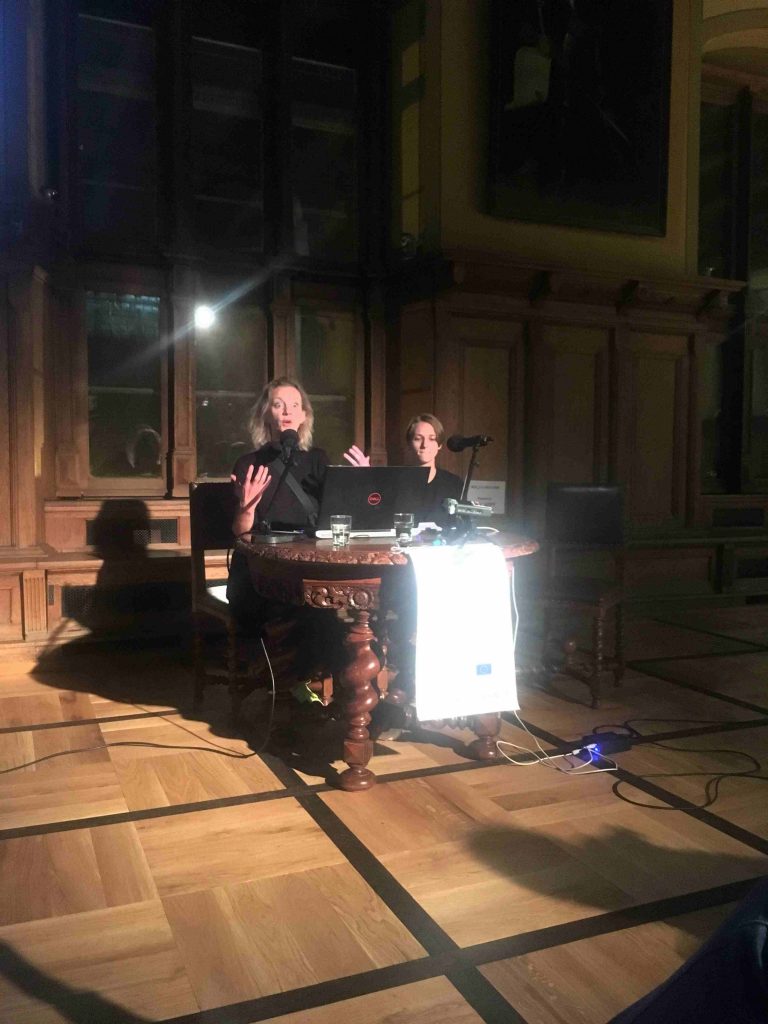 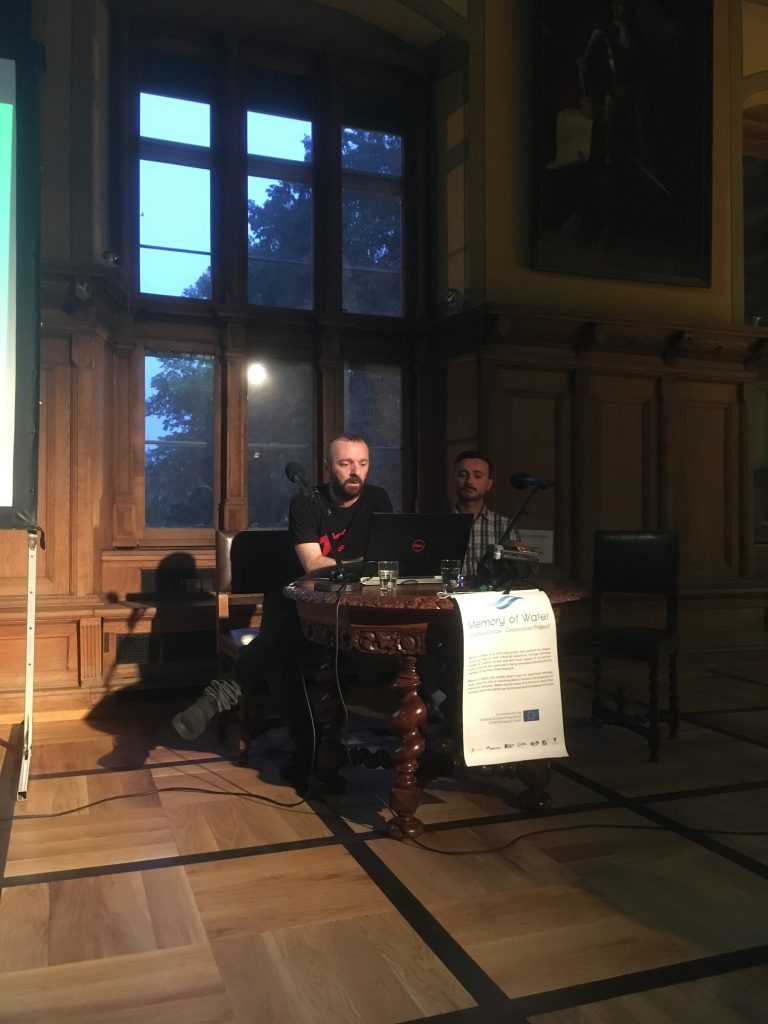 Gdansk’s international Urban Lab was distinguished by a keynote presentation from Trevor Davies of Copenhagen who introduced us to the ideas of ‘perpetual temporality’ and ‘organic evolution’ in planning theory which Copenhagen is actually putting into practice on its waterfront. Davies proposed this approach rather than thinking that masterplanning and setting things in stone is the inevitable approach to planning. Professor Kosmala introduced some useful distinctions around terminology: cultural regeneration, culture led regeneration, cultural interventionism and cultural planning, with an acknowledgement that what Trevor Davies and our participating artists are proposing is cultural planning.

The learning has only just begun from our process in Govan but already there are some echoes from Gdansk:

– Artists have been intervening to encourage new thinking for decades and there are many comparisons with Gdansk and other European cities. The artists interventions don’t seem to have changed the plans significantly but they have influenced the dialogue.

– The threat of gentrification is as big a threat in Govan as it is in other European cities. Gdansk shipyard already hosts some dominant tower blocks. Already, much of Glasgow’s River Clyde has been built on with high rise homes and loss of industrial infrastructure. There are a few locations left, with Govan Graving Docks being one of them. What will happen to them and can the artistic interventionism make any real, tangible impact is the key question.

– In Glasgow, we noticed the dialogue about arts and culture tends to be focused on “arts development” rather than cultural planning with Glasgow City Council officers and we wonder how we can influence that thinking. Without full distinction of the differences, it will remain a struggle for the Govan Hill Baths Trust and the Kinning Park Complex as well as the Govan Graving Docks. Mainland Europe’s cultural development has emerged from a different source and artistic interventionism is both accepted and funded through Creative Europe. Because Scottish participatory arts practice emerged from community arts practice, there is an understanding of community participation while there is a lack of distinction around participatory interventionism, with European funding unable, currently to respond to the different needs of this kind of approach.

– The question of Governance is a fascinating area that is opening up from both our Gdansk and Govan deliberations. There is a big focus on artist collaboratives and artist collectives across Europe in the 21st Century. However, it seems to be the structure that has both artists and local people in the management and driving seats that have the most power and sustainability to actually develop community ownership and attract funding for alternative planning proposals. We have seen this in our Govan Urban lab with the artist and community led community development trust models developed and described by Alex Wilde (Govanhill Baths Trust), Helen Kyle (Kinning Park Complex) and Mark Ziagio from the Stove Network in Dumfries. We met a social enterprise in Gdansk that is taking over number 3 Crane to develop and we wait to see how their project develops.

These are just three of the key themes that are emerging from my initial thinking. All these themes were explored further and to brought to our thinking when we next met in Gdansk, and it is clear that some of the thinking in Gdansk is more advanced.

– An additional key debate in Gdansk, was around the long term impact of artistic interventionism. Architect, teacher and urban planner, Jacek Dominicek, praised the work of our Memory of Water artists as well as the work of all the other interventions from many artists over three decades but expressed a growing sense of impatience and exasperation. He acknowledged that artists interventions are designed to act like ‘acupuncture points’. They create a tiny pin-prick in reality but the results can spread throughout the whole organism. Jacek’s observation is, however that this anticipated ‘spreading’ impact is not actually happening. Yes there have been victories: there are several buildings in the shipyard (including Gdansk’s’ iconic cranes) that are now subject of preservation orders but where is the evidence of any real, large scale impact on planning ideas?

Gdansk curator Agnieska Wolodsko countered this exasperation with an assertion that we should not have high impact and long term expectations from the work of artists.

My question centres on what structures need to be in place to allow the work of the artists to have maximum impact? Artists work on the subliminal, the symbolic, and are concerned with the dialogue. Without key players in the public, private and voluntary sectors working in partnership however, the work of the artists is bound to remain as ideas. Only if planners, local authority operators and developers are working in partnership will there be any real impact on the ground.

In Gdansk, where activists and artists have worked together over several decades, there is some evidence of legacy from the project. It is no co-incidence, for example, that the CEO of the developer Cesarskas’ Gdansk Shipyard development was inspired by Tara’s work in the garden, rolled up his sleeves and planted out the beds. He also attended the urban lab then stayed with us and attended most of the artists final events during Saturday, 19th October. The emphasis on heritage is visible in the new plans for Toolmaker Street. Gerard is offering to come to Glasgow in June to participate in our Govan international urban lab. Learning from the experiences of activists in Gdansk has spread to Govan in other ways. For example, from a position of assumption that there is no point in talking to the owners of the Govan Docks as they will never listen or change open their thinking, there is now a dialogue taking place between the activists groups and the owners/developers of Govan Graving Docks.

We are delighted to have been invited to exhibit the initial outputs from Memory of Water in the Scottish Parliament during the production week in Govan, scheduled for June 2020. This is on the one hand a huge opportunity and on the other, a daunting prospect as we need to capitalise on the possibilities, to create something with impact, quality and outputs and we need to inspire debate around it in the parliament.