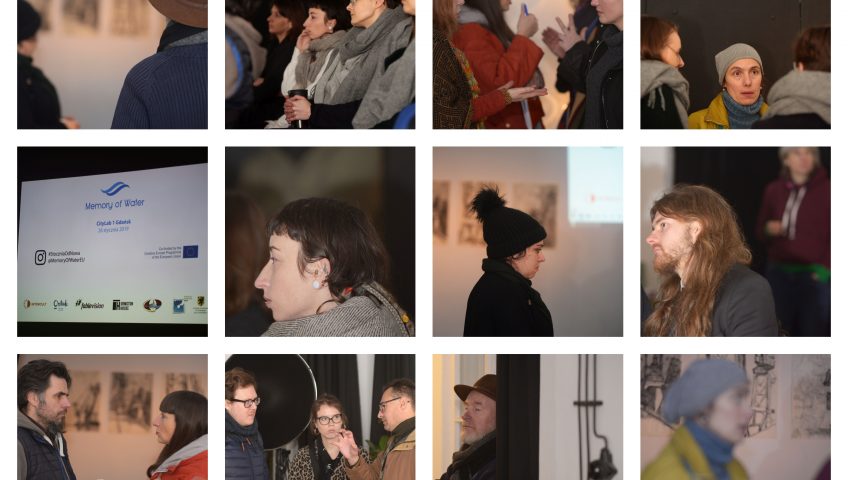 Under this slogan STOCZNIA OD NOWA, a group of independent artists and cultural activists in Gdańsk want to jointly develop a complex social vision for the regeneration of post-industrial shipyard waterfronts, in conjunction with the Creative Europe Memory of Water project and local partner, the Baltic Sea Cultural Centre. This process is seen as the legacy of the long-term activities of Kolonia Artystów (Colony of Artists) in the former Gdańsk Shipyard area.

The first meeting, in the form of a City Lab initiating open public debate on this vision, took place in Luks Sfera photo atelier in the shipyard area on Saturday night 26 January. In line with  culture-led regeneration  methodologies, interested stakeholders are invited to participate in the coming weeks and months – among them city activists, as well as representatives of public authorities at state and local level, post-shipyard area property owners and developers. This process will result in raising social awareness of the great value of cultural heritage in the post-shipyard area which should be reflected in development plans.

The City Lab moderated by Roman Sebastyanski gathered 20 participants and was comprised of two parts: firstly, a series of short presentations by participants which referred to their dream solutions for the regeneration of the former Gdańsk Shipyard area; and secondly, an open discussion at a  pop-up exhibition of artworks referring to the shipyard, curated by Agnieszka Wolodzko and featuring films by Iwona Zając, Dorota Nieznalska and Roman Sebastyanski, a model installation by Dorota Nieznalska, and drawings by Agnieszka Wolodzko.

The dreams collected during the gathering will serve as the foundation for building an alternative, creative vision for the development of the post-shipyard area.