t s Beall is a socially-engaged artist and researcher based in Glasgow and Dumfries. She works with communities on long-term or durational projects to recover and highlight marginalised histories. Her work spans a variety of media including performative events and guided artwalks.

Since 2009, Beall has worked with diverse communities to develop creative heritage and socially-engaged art projects, collaborating with under-represented communities in Govan (Glasgow) and across Scotland. In 2017, she was awarded an AHRC-funded Collaborative Doctoral Award at University of Glasgow, working with the Riverside Museum and Glasgow Museums.

Through the Wringer, Govan, November 2020

t s Beall's project, Through the Wringer, was conceptualised as a series of mobile washing events in Govan – each including stories, songs, and people ‘doin’ the washin’. Due to COVID-19 restrictions only one washing event took place, in the backcourt (or backyard) of a tenement, inviting neighbours to watch from their windows. The inspiration came from the history of Glasgow’s steamies (or wash houses) and pivoted to include COVID hygiene protocols (like hand-washing), although the stories themselves were gathered from interviews conducted by the artist – including those who remembered steamies, health care workers, and women whose care burdens have increased during the pandemic. Similar to Beall’s work in Levadia, Greece for Memory of Water, portions of the spoken word and stories for the event were written on cloth which was washed and hung to dry.

In a series of symbolic gestures, the artist t s Beall outlined the footprint of a flower garden, greenhouse, and gardener’s house which was once located in the Gdansk shipyard, and invited the public to help her replant historical flower beds on Toolmakers’ Street. The public was also invited to take part in a week of embroidery workshops of flower motifs which were staged on the M3 Crane platform (and elsewhere in the shipyard), inspired by stories of the women workers who embroidered during their breaks. Through these activities, the artist commemorated women workers, specifically pipe insulators who stitched with toxic materials and whose early graves Beall visited, leaving flowers as a gesture of respect.

In Levadia, t s Beall lead a procession from Nerotrivi to the Riverside park near Dioikitirio an event took place inspired by the Greek saying: Let the river take it. The event celebrated Levadia’s history and the river’s central role within it – from the myth of the Oracle of Trophonious, to powering cotton mills, to washing linens. The afternoon included storytelling, washing clothes, and singing with citizens from KEDHL, LEVADRO, and local community groups and choirs. 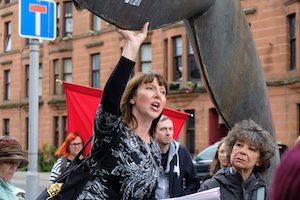